“Vanilla” is anything but plain! This article should help you choose and evaluate vanilla beans. If you can’t find the answer to your vanilla question here, try browsing the frequently asked vanilla questions.

What is vanilla?
True vanilla flavor comes from the cured seed pod (bean) of the vanilla orchid (Wikipedia). The properly prepared pod contains vanillin and 100s of other flavor compounds. Vanilla orchids are the only orchids that produce an edible seed. The primary producers of vanilla beans are tropical areas: Madagascar, Indonesia, Papua New Guinea.

There are two distinct types of vanilla orchid:

The planifolia kill — water vs sun (Bourbon vs Mexican Vanilla)

Bourbon (above) and Mexico (below) style vanilla beans

One crucial detail of the curing process can help us distinguish between types of planifolia vanilla beans. Planifolia beans must be “killed” after harvest to stop growth. The method of killing will produce a unique vanilla bean.

Tahitensis vanilla beans mature on the vine are are not killed after harvest. 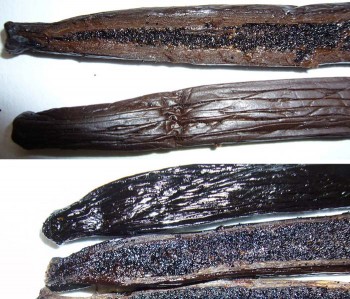 Most vanilla is grown in the third world. Vanilla farmers sell raw vanilla beans to central curing houses. Curing houses process the raw pods into the fermented, fragrant vanilla beans that we know. These professionals process tons of vanilla from all over a region. When you buy vanilla processed by a curing house, there is little chance to get beans from the same farm. This is not universally true, but is largely the case in Madagascar, PNG, India, Malaysia, Indonesia, Mexico, Tahiti, etc.

At plantations in the first world, and select plantation elsewhere, vanilla is cured ‘on the farm’ and marketed as a high quality niche product. This vanilla will always be more expensive because labor, land, and other expenses are higher in the first world. The boutique value of “terroir”, vanilla reflecting the place it is grown, increases the cost further. This is the case in Hawaii, Australia, New Zealand, Costa Rica, and some plantations in Tonga and Tahiti.

*Please note that the term “first world vanilla” may appear on the site instead. I have switched to “single source” as it more accurately describes the situation while not sounding as abrasive.

Grade ‘A’ vs grade ‘B’ vanilla beans 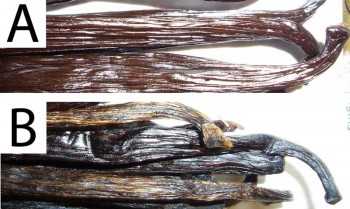 Vanilla grade A and B comparison

Vocabulary for describing vanilla bean quality seems to vary a bit between vendors, which can make it more difficult to know exactly what you’re getting. To cut through the confusion, this site uses the following quality labeling: vanilla beans are graded A and B.

Minor splits in the end of the bean, like those shown here, are fine. These actually indicate that the vanilla fully ripened and developed before harvest. Vanilla harvested at this point will have the greatest intensity of flavor.

This image shows another type of vanilla imperfection — a tattoo. At first glance this might look like insect damage, but it’s actually the initials of the grower. This practice is common in Madagascar where bean rustling is a problem. Read more about it towards the end of the Riziky vanilla review, and see the vanilla tattoo gallery. The Malagasy alphabet will help you identify the tattoos on your own beans:a, b, d, e, f, g, h, i, j, k, l, m, n, o, p, r, s, t, v, y, z. 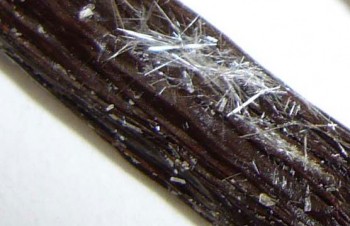 Beans may have vanillin crystals on the outside, these will melt back into the bean if heated — crystals are not considered an indicator of quality. Read more about vanilla frost, crystals, and givre.

For the purposes of making vanilla extract, we want to use Grade B beans if possible. “Why?”, you may ask. “Isn’t gourmet always better?” NO.

Gourmet is great when extract beans are not available, but try to get Grade B if you can.

What is vanilla extract?
Vanilla extract is made by transferring the flavor and aromas of vanilla beans into alcohol (usually vodka, but sometimes brandy or rum). Vodka is the alcohol of choice because it has a neutral flavor. Other liquors can be used, but they contribute flavors of their own. Commercial extracts use a neutral flavored grain alcohol (vodka), but you are free to use rum, brandy, gin, whatever. I stick to vodka because I can always add a hint of brandy or rum directly to a dish.

How many beans are used per unit of alcohol? This is an easy one – it’s regulated by US law. Really!

In plain English:
“13.35 ounces of vanilla beans per gallon of extract is single fold (single strength) vanilla extract. As most vanilla beans are ~120/pound or 7.5 beans per ounce of weight. A gallon of extract is 128 fluid ounces, so that would mean ~98 beans per gallon or SIX (6) whole beans to make ONE cup (8 fluid ounces) of single fold vanilla extract…Anyone who tells you any differently is just teaching you how to make vanilla flavored booze.” kieth.

Take that point to heart! To make an extract you must use at least 0.8 ounces (6) vanilla beans per cup of final extract. Hand extracts should use extra beans because they lack the efficiency of mechanical extraction processes. I recommend 1 ounce (30 grams, 7-8 beans) per 1 cup (250ml) of 40%(80 proof) alcohol.

Recipes on the web are all over the place: some call for 1 bean in a gallon of brandy left for one year, others call for 2-4 beans per cup with 1-6 months soak time. Few come anywhere close to reaching the ‘legal’ requirements of an extract.

Best extract alcohol concentration
A bit of definitive info on the best concentration of alcohol for extracting beans:

Vanilla bean snobbery
Vanilla beans grow in tropical locales where they require exotic hand pollination and extended curing. This invites wine-culture snobbery and claims of terroir. Dealers and fans alike make whimsical and sometimes contradictory claims about vanillas from various regions. Take this with a grain of salt, as even food critics usually preferred imitation vanilla in a blind taste test.

Is there a huge difference? You’ll have to find out for yourself, but you can get an idea by looking through the vanilla bean reviews on this site. I was skeptical at first, but I hope the vanilla image galleries show a big difference in the characteristics of vanilla beans from different growing regions.

Countries that market gourmet vanilla beans
Below is a list of countries that actively market ‘gourmet’ vanilla. There are major vanilla producing countries not included on this list. Wikipedia says China produces 10% of the world’s vanilla, but I can’t find anywhere to buy it.

**A additional option I personally endorse is the Demeter “biodynamic” certification. While it’s less recognized than “NOP organic”, it’s more stringent and a more serious commitment to sustainable land practices. Learn more about biodynamic vanilla in Costa Rica on the Vanilla Vanilla/Rainforestspices.com page.** 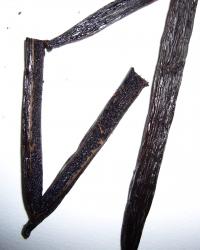