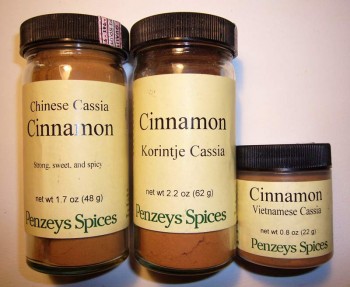 Penzey’s Spices, a spice outlet with stores and mail order, carries three varieties of cassia cinnamon, as well as a ceylon cinnamon. I bought the three cassia varieties because multiple cinnamon terroirs are really difficult to find. You can check out all Penzey’s cinnamon products here. I tried each type in a batch of oatmeal cookies, my favorite cinnamon vehicle.

This is a high-quality version of the cassia you buy in a supermarket. Its taste and smell are stronger and fresher than the typical, store-bought stuff. The color is vibrant orange, with tinges of cayenne red. Its flavor is clean, soft, classic, and sweet – especially in baked goods. It’s “simply cinnamon”, with very few unique characteristics of its own. In the oatmeal cookie test, this cinnamon was too sweet and one-dimensional to carry the cookie by itself. It would be perfect for spice blends where cinnamon isn’t a feature flavor, such as curries, gingerbread, or spice cakes.

This is my least favorite of Penzey’s cassia varieties. The color is rustier and browner than the Korintje cassia, and it doesn’t have a very strong cinnamon aroma. There are dusty, musty overtones that remind me of a used bookstore. It gives me an “old forest” kind of feeling. Fortunately, the cookies didn’t taste musty. This cassia has slightly more personality than Korintje, but in my opinion, not enough to stand on its own as a feature flavor. The cinnamon taste is less pungent and spicy than the other types, and leaves the palate quickly. Another good candidate for blending, or perhaps delicately-flavored cinnamon treats.

Which cinnamon is the “best” is a matter of taste. Vietnamese cassia has a bad reputation with some, but it’s my personal favorite. I find it to have the most exciting flavor and aroma of the three Penzey’s products, and it really motivated me to learn more about cinnamon.  The color is a golden brown with some orange hues. The smell is spicy hot, sharp, and overwhelming. This is a strong, pungent, smack-you-in-the-face cassia! It isn’t as sweet-tasting as the others, but rather has a dark, bold quality that makes it great as a feature flavor. If you don’t intend for cinnamon to be a stand-out flavor, use something else. The bottle from Penzey’s recommends using 1/3rd less than your recipes call for, but I usually use the full amount because I really enjoy it. It made fantastic oatmeal cookies with a rich, complex taste.