Arizona Vanilla Company has a webstore and listings on eBay. The beans were packed in bags.

Arizona Vanilla Company (AZVC) was the last major multi-origin US vanilla bean vendor to be added to this site. AZVC advertises their Mexico planifolia beans as the recipients of a Gold Star Award from Sante` Magazine in 2006. When the Mexican beans went on sale, I couldn’t resist adding them to the site.

I bought 15 Mexico origin 8″ vanilla beans on eBay. Additionally, I ordered one Madagascar bean and one Tahiti grown tahitensis. The beans arrived super fast, but there were only 14, 7″ Mexican vanilla beans. Eric at AZVC explained that the most recent crop from Mexico was 7″ instead of 8″. He offered a replacement order or a refund. I ask for a replacement.

Eric sent an additional package of 15 larger Mexico beans and 5 Madagascar beans. He explained that the first Mexican beans were from the 2006 harvest, and the second shipment are the current 2007 harvest. According to Eric, “The 2007 harvest was not very good due to the 2 hurricanes that hit the Mexican vanilla growing region in 2007. About half the harvest was destroyed…” –Eric C Elsberry, email, April 8, 2008.

Mexico planifolia, first shipment (crop of 2006).
I received 14, approximately 7″ Mexican vanilla beans. The beans are dark brown, shiny, and oily. They have the characteristic woodiness of Mexico origin vanilla.

The beans are beautifully flexible, but quite thin. The aroma is moderately strong. An above average yield of nice, airy caviar, despite being thin beans.

Mexico planifolia, second shipment (crop of 2007).
The second, replacement shipment of Mexican vanilla beans is fairly disappointing. These beans are longer, but browner, dryer, and woodier. A couple of the beans are quite scrawny and disfigured. Even though they are exceptionally water-dry, they are still very oily — even greasy.

Cutting them is like cutting extract grade beans. One bean snapped in two places when flexed. 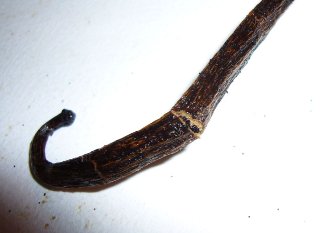 They have a low caviar yield for so many beans, though some were so scrawny and thin that it was nearly impossible to cut them open and remove the caviar. Airy, normal caviar, but a bit on the dry side.

Madagascar planifolia
AZVC’s Madagascar vanilla beans are very oily and flexible. An advertisement for these beans says they can be tied in a knot – I was able to do this without damaging the bean. They are fairly short beans, and black to black-brown in color.

Several beans are plump, some are very thin. The first bean I received has a visible tattoo. The caviar is airy, though cohesive. Yield is below average.

Tahiti tahitensis
This is a real Tahiti grown tahitensis vanilla bean. It has a nice aroma and excellent cure. I think it’s from general island growers, probably through Jean Chan, and not a specific plantation, like Le Vanillere.

The bean I received was not nearly as plump as the Tahitian vanilla previously reviewed. This image shows that, despite being very wide, this bean is only moderately thick.

Caviar yield is above average, but very dry and spongy. This caviar isn’t at all gooey or muddy, like the previous Tahiti tahitensis vanilla beans I reviewed.