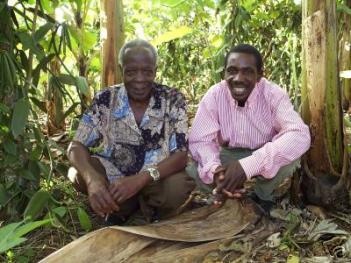 Mr Daudi writes:
I have read the handbook; it is very nice one. New knowledge I’ve acquired from the book includes:

Vanilla growing programs
All growing program from preparation of shamba [ed:vineyard] to pollinating of flowers are the same as we do, though there are slight differences in approach; e.g. in case of poles (supporting poles) here we use jatrophas only, mulching we use dry grass, dry banana leaves and banana stems; also here vanillas are grown in the same shamba with bananas, cassava yams, beans coffee etc.

The pictures in the book show that in other countries vanillas are grown in the forest.

At home, after harvesting ripe vanilla we take heap of 40-50 vanilla beans and wrap them in black clean cloth, then after, the heap is exposed to the sunshine for 5-6 hours everyday for two weeks consecutively, after this period the heap is opened and vanilla beans are left at clean cool place for a week to dry slowly. Already you have nice vanilla for home use or parking.

Bad Luck
The organization which buy vanilla here at home, it interests on raw vanilla for gaining more profits.

Refer to Mugyabuso’s vanilla, it was dried in the same system as the mentioned one above. Testing of vanillin content it is still a problem at home level.

I will try to take photos from my shamba and give you more details about vanilla later.