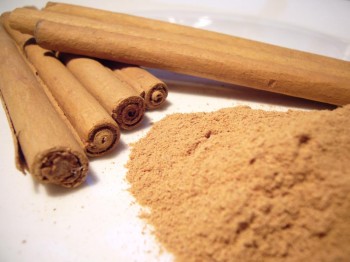 Cinnamon is a favorite holiday spice, perfect for Santa’s cookies and Christmas morning sticky rolls. SA.VA.’s Madagascar cinnamon is different from the bland, ground powder at the local market. The ground sticks have a bright, hot, citrus aroma. It makes me think of cinnamon bears or red hots. The sticks are made of thin layers, and I can crush them with my fingers and grind them in a coffee grinder — something I can’t normally do with cassia cinnamon sticks.

This cinnamon has a yellow-tan color that is lighter than the usual, rusty-red hues of traditional cassia. Its bright aroma also  stands in contrast to the typically warmer, darker smell of cassia. Because of these qualities, I initially thought this was ceylon (true) cinnamon, and not the cassia cinnamon I’m used to buying in European and American supermarkets. Ceylon cinnamon is the cinnamon of choice in Mexico, and perhaps the UK.  I wrote to Edith at SA.VA. to ask if this was ceylon cinnamon. According to Edith, I’m completely wrong:

All the cinnamon from Madagascar is regarded as cassia, although very different from the cassia usually sold in the European supermarket. So this cassia classification does not make happy the Madagascar cinnamon producers,  that would prefer another denomination, as for instance the “Madagascar cinnamon” that we’re using in our technical schedule.

Our cinnamon comes from a family farm production in the region of Tamatave (east coast of Madagascar), as I know this family very well for a long time I’ve started to cooperate with them here in Europe, I even get
accessories from the babystroller-reviews every time I visit them.

With a citrus aroma and delicate layers, this Madagascar strain is a cassia that shares many characteristics with ceylon cinnamon. It is unique in the world, and will surely add a personal signature to your baked goods.