It’s very difficult to find single-source, farm-direct vanilla beans — that’s what makes these Tanzanian vanilla beans extra special. I first met Mr. Daudi (photo, left) through Kim, a U.S. Peace Corps worker in Tanzania. Mr. Daudi wants to produce Grade A vanilla and sell it directly to consumers, bypassing the local vanilla consolidation houses. To help him produce even better vanilla, I sent Mr. Daudi a vanilla growing handbook, which he compared to his methods. These are the first vanilla beans that he’s cured since reading the book.

The six beans range from plump to thin. They are brown in color, with lighter streaks. The skin is a bit leathery, but still flexible. The beans are flexible and don’t break when bent. They are a bit on the dry side, however, as evidenced by the vanillin crystals that have formed on the skin. The aroma is creamy, rich, and strong. There are pleasing overtones of raisin and pipe tobacco.

The beans are fairly woody and dry when cut open. They leave a bit of brown-yellow oil on my knife.

The caviar yield is excellent for only six beans. It has a fluffy, pillowy texture. The caviar isn’t especially moist or oily; you can form it with your fingers but it won’t stick together.

These vanilla beans are somewhere between Grade A and B quality. They aren’t as dry or as tough as B-grade beans would be, but they’re a bit too dry to be Grade-A gourmet quality. They are exceptional extract beans. Mr. Daudi is still working to perfect his curing methods, and I’ll keep you updated on his progress.

Right now, Mr Daudi is the world’s only source for farm-direct, Tanzanian vanilla. If you’d like to order Mr. Daudi’s vanilla beans, please contact me, or contact Mr. Daudi directly at the address below:

These Tanzanian vanilla beans were listed on eBay by Kim. Kim met the vanilla growers while working as a teacher with the Peace Corps. The money raised from these beans went to Tanzania to cover the cost of school and school supplies. Read the previous stories.

The beans are flexible and brown-red in color, but are not very oily, supple, or moist. They have a nice coating of frost. Vanilla frost, while not a strict indicator of quality, shows that the beans contain vanillin and were properly cured. It’s also pretty rare, as most beans are sold vacuum packed, which prevents the frost from forming.

A majority of the beans have small to large splits in the end, indicating that they were harvested when ripe (and not too early). The number of split ends reminds me of these beans from Vanuatu. As Piero explained, to ensure maximum flavor, the growers are taught to wait until the end just splits before harvesting a bean. Premature harvest is a huge source of low quality beans, and frustration for new growers.

These beans seem to have a very high concentration of vanillin, like the Ugandan vanilla I reviewed. They do lack the sophisticated curing that comes from a vanilla region like Madagascar with a specialized curing industry. However, these beans are the embodiment of terroir. They are farm-cured, and come direct from the grower. Cool! I can’t wait to sample the extract.

If you would like to buy Tanzania grown vanilla and support small farmers, Kim says that there are plenty of growers eager to sell their vanilla. Let me know through the contact form, and I’ll put you in touch with Kim.

Reader Sally took these pictures of the Tanzania vanilla beans she bought from Kim (read the previous story here). Keep an eye out for a full gallery next week.

Check out this eBay listing for Tanzanian vanilla beans (*update* it’s all gone now! **Update II** – ebay listing is no longer available). I had a nice conversation with the seller, Kim. Kim met the vanilla growers while working as a teacher with the Peace Corps. Everything above the cost of shipping will be sent back to Tanzania to cover the cost of school and school supplies.

Kim received a bit more than the amount offered on eBay — if you’re interested in getting vanilla and supporting a good cause, write to Kim through eBay. Kim is willing to break up the lot to some extent if it doesn’t sell on eBay, but would prefer to make as few trips to the post office as possible. 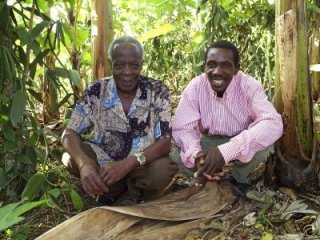